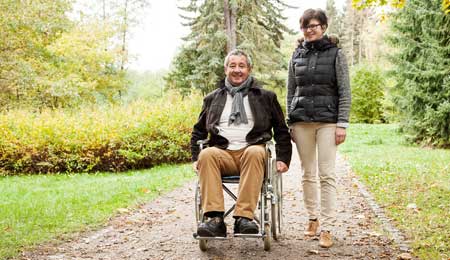 Tips On Talking And Writing About People With Disabilities

Language is a reflection of how people see each other. That is why responsible communicators are now choosing language that reflects the dignity of people with disabilities - words that put the person first, rather than the disability.

Even the Associated Press Stylebook, the "journalist's bible," recognizes this responsibility and includes tips in its handbook on the appropriate way to refer to persons with varying types of disabilities.

Trendy euphemisms and disability terms will change over time. Here are some tips on using language that is appropriate and that will stand the test of time:

In following these few simple guidelines, you can write and communicate with confidence. Just remember: we are all "temporarily-abled." At some point in our lives, we will be faced with a disability of some kind and we must ask ourselves, "How would I want someone to write or talk about me?"

Other Words And Their Appropriate Use

"Handicap" is used to describe a barrier or a problem created by society or the environment, not a person's disability. Therefore, people should not be referred to as "handicapped." For example, "The teacher's negative attitude was a handicap to her." Or "The stairs leading to the stage were a handicap to him." Remnants of the term's old use may still be seen in contexts such as "handicapped parking" signs, but these are gradually being updated.

"Impairment" is used to characterize a physical, mental or physiological loss, abnormality or injury that causes a limitation in one or more major life functions. For example, "The loss of her right arm was only a slight impairment to her ability to drive." Do not use "impaired" to describe the person. he is not "hearing impaired;" he is "deaf or hard of hearing."

"Deaf" refers to profound hearing loss. "Hard of hearing" may be used to describe any degree of hearing loss, from slight to moderate.

"Blind" most frequently is used to describe a severe vision loss. Either "person who is blind" or "person with low vision" are acceptable.

"Mental illness" is a term describing many forms of illnesses such as schizophrenia, depression and emotional disorders. Use "person with a mental disability" rather than referring to an individual as "deranged" or "deviant." Clinical terms such as "neurotic" and "psychotic" should be used only for clinical writing. Other terms such as "demented," "insane," "abnormal," "deranged" and "mad" often are used incorrectly and should be avoided.

This article is provided courtesy of the Oklahoma Department of Human Services, issued 10/2006.

Would You Like More Information On "People First" Language?